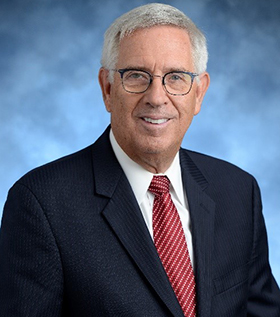 James W. Owens was named chairman and CEO of Caterpillar, Inc. in 2004 and retired in mid-2010 after thirty-eight years of service. He was president of Solar Turbines in San Diego from 1990-93 and corporate CFO from 1993-95. In 1995 he became a group president and member of Caterpillar’s executive office. While chairman, Owens served on the executive committee of the Business Roundtable, was chairman of the Business Council and an advisor to Presidents Bush and Obama. He served on President Obama’s Economic Recovery Advisory Board from 2009 to 2010.

Owens is currently a director of Alcoa Inc. He recently retired from the boards of IBM Corporation and Morgan Stanley. Owens was chairman of the executive committee for the Peterson Institute for International Economics, and served on the Board of Directors of the Council on Foreign Relations. He is a former chairman of the board of trustees for North Carolina State University in Raleigh, North Carolina. Owens is a native of Elizabeth City, North Carolina, and graduated from NC State University in 1973 with a PhD in economics.