Please join us for the second installment of the Shelton Speaker Series, a partnership with the University Honors and Scholars Program. This semester we are hosting a two-day event with panelists from the public, private, and nonprofit sectors to discuss issues of access during the pandemic.

Dr. Rodney Trice was named Assistant Superintendent for Equity Affairs in July 2014. Prior to joining WCPSS, he served as Executive Director for Curriculum, Instruction & Technology and later Associate Superintendent for Student & School Services and Equity Oversight with the Chapel Hill-Carrboro City Schools. Dr. Trice has served in leadership roles for professional organizations focused on educational equity at the state and national level, and has led numerous workshops for schools and districts around the country on promoting equity in education. Dr. Trice graduated with a B.S. in Biology from Morehouse College (Atlanta, Ga). He received a Masters in School Leadership from the University of Detroit Mercy and Doctorate in Educational Leadership from the University of North Carolina at Chapel Hill.

Allison Reid is an experienced educator, CETL certified technology leader, and Google Certified Trainer who is certified English, Theatre Arts, and Technology, with a Master of Education (MEd) focused in Instructional Technology from NC State University. Allison is a member of the Wake County Public School System’s Digital Learning & Libraries team, where she serves as their Senior Director. She served as WCPSS’s 2014-15 Teacher of the Year, and was awarded the 2019 CoSN NextGen Emerging EdTech Leader. She works as a contributor to the CoSN Digital Equity Toolkit, which provides guidance for districts around the world as they address digital equity in their policies and school expectations. Her experience as both a teacher and a technologist enables her to ensure that administrative policy results in positive student outcomes in the classroom

As a recent transplant to North Carolina, Rachel Quigley brings over 10 years of experience into supporting nonprofit development and communication strategies as the Business, Corporation, and Events Manager at Inter-Faith Food Shuttle. Rachel’s favorite part about her job is building strategic relationships with businesses, community groups, and individuals to fund critical programs to end hunger. She holds a BA in Business Administration in Marketing from Seattle Pacific University and while she does not miss the rain, she keeps her Seattle roots strong through a deep love of coffee.

The Food Shuttle saves 5.5 million pounds of healthy food from being thrown away and re-routes it to these people in need. Almost 35% of what we distribute is fresh produce. This food comes from retail food donations, the Food Shuttle Farm, volunteer food drives, and field gleaning…click here to learn more about where we get our food.

We feed people through programs such as BackPack Buddies, Mobile Markets, Grocery Bags for Seniors, School Pantries, our Mobile Tastiness Machine, and by partnering with almost 100 local agencies in neighborhoods throughout our service area to reach people at their point of need.

Angelica Razo is the Texas State Director for Mi Familia Vota. Angelica has always been passionate about contributing to advocacy and engagement efforts that lead to sustainable and equitable solutions for her community.

Angelica first joined Mi Familia Vota in 2017 to lead the organization’s youth leadership program in Houston. Now, as Texas State Director, she oversees the state’s operations to increase political representation and power for the Latinx community through advocacy and community organizing strategies. Her strong belief in community empowerment motivates her to engage others so they can find their own unique civic role while participating in collective action. Angelica is part of the Houston in Action Steering Committee and co-chairs the Voter Engagement committee. She co-chairs the Government Affairs committee for the Coalition for Environment Equity and Resilience. She recently joined the Race Equity Leadership and Research Collective Steering Committee.

Angelica obtained her Bachelor of Arts from Rice University in 2016. She remains connected to her university by serving on the Society of Latino Alumni at Rice (SOLAR) Board and connecting current students to civic engagement opportunities. She remains based in Houston and is a true believer that the city’s food scene remains unrivaled.

Mi Familia Vota / Mi Familia Vota Education Fund is a leading grassroots Latino civic engagement organization in the country. The mission of the Mi Familia Vota is to facilitate the civic engagement of Latino communities; by providing year-round critical information and assistance with immigration and citizenship programs, and by conducting nonpartisan voter education and voter turnout programs. We support community-based infrastructure by connecting the Latino community to issue-based campaigns for the advancement of civil, social and economic justice. Throughout the election cycle, MFVEF engages with voters around six issues: immigration, education, health care, economic and worker justice, voting rights and the environment. With field offices in 6 states and 15 cities, MFV is strategically positioned where the Latino vote can make a significant impact in the outcome of local, state, and federal elections.

Justin Shaka is the cofounder and CEO of Rebion, a medical device company developing technologies that identify brain and eye dysfunctions. At Rebion, Mr. Shaka has raised over $10M for the company, which has resulted in the establishment of clinical trials across multiple countries, and an FDA-cleared product that identifies the leading causes of vision loss in children. Prior to Rebion, Mr. Shaka worked as a Financial Analyst at Boston Children’s Hospital while also serving on the Journal for American Association for Pediatric Ophthalmology and Strabismus Editorial Administration.

Mr. Shaka holds an MBA from Carnegie Mellon University, and a BA from the University of New Hampshire. He currently lives in Boston with his wife and two children. 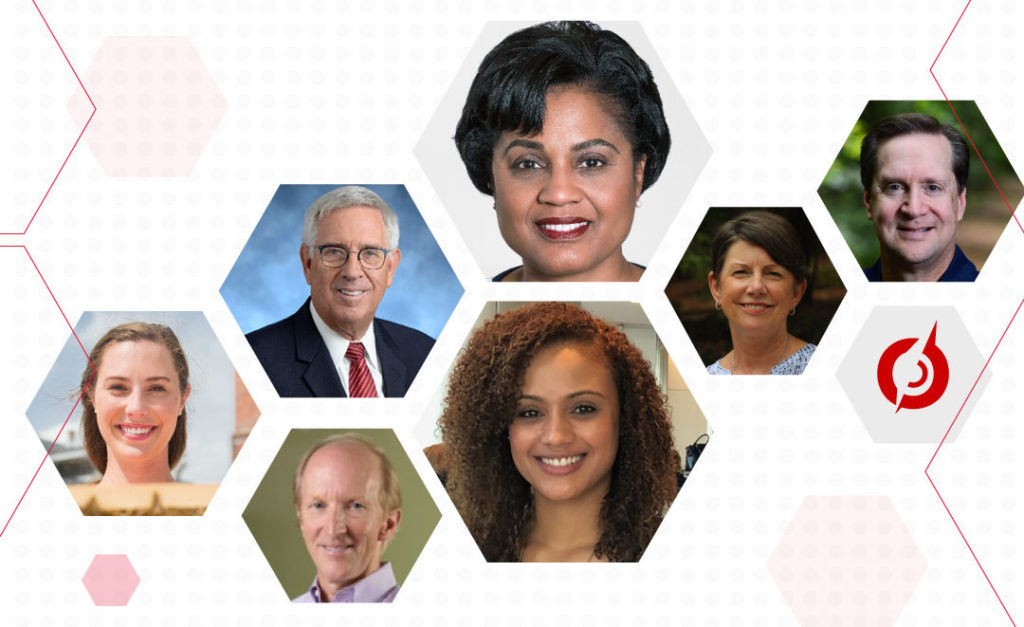 We all have a story, and often, our journeys do not turn out the way we envisioned.

With the inaugural Shelton Speaker Series, we invite the campus community to hear how seven alumni have used their NC State experiences to become leaders in unexpected careers.

The April 6, 2020 event has been cancelled in accordance with current university policy regarding COVID-19.

This event is open to all NC State students, faculty, and staff. Doors will open at 3pm and seats will be available on a first come, first serve basis.

Gayle Lanier retired in 2018 as senior vice president and chief customer officer for Duke Energy. Gayle Lanier has over 30 years of experience as a transformational business executive at Fortune 500 companies across multiple industries. She has been instrumental in leading world class organizations that have consistently exceeded revenue and earnings objectives.

She had responsibility for call center operations, revenue billing and receivables, metering services, marketing, energy efficiency and relationships with large business customers. She assumed her current position following the merger between Duke Energy and Progress Energy in July 2012 where at Progress Energy she served as vice president of corporate services. Prior to that, she held leadership roles at both Nortel and EMC (previously Data General Corp.). At Nortel, Lanier served as vice president and general manager of Nortel Knowledge Services. She had global responsibility for Nortel’s strategic direction and performance for all training, documentation and leadership development for the company’s employees, customers and channel partners. Other roles held at Nortel include vice president of global corporate operations and general manager of time-division multiplexing (TDM) portfolio, where she had profit and loss accountability for the TDM family of switching systems. Lanier was also responsible for the development and deployment of Nortel’s first Voice over Internet Protocol product line. Lanier’s time at Data General included various engineering roles and culminated in management roles in new product introduction and materials planning.

Gayle received a BS in Industrial Engineering from NC State in 1982. Across three industries, one thing has always held true, Gayle’s love for NC State!

Brittany Lanier received a B.S. in Chemical and Biomolecular Engineering with a minor in Spanish from NC State University in 2007. She worked as a Process Engineer for KBR in Morrisville, NC, where she led several Pulp and Paper projects working with companies across the Mid-Atlantic Region. Brittany later went on to pursue her MBA at Harvard Business School. During Business School, she made a career switch into Brand Management. After graduating from Business School in 2013, she moved to Chicago and began a career at ConAgra Foods working on various brands from PAM Cooking Spray to Healthy Choice Soups. With a personal interest in homebrewing, she decided to pair her passion with her career and began her current position in the beer industry at MillerCoors. While at MillerCoors, she has led large national TV campaigns for multiple beer brands including Blue Moon and Miller Lite and has even earned her Certified Cicerone recognition. She is currently the Marketing Manager for Mexican Imports.

James W. Owens was named chairman and CEO of Caterpillar, Inc. in 2004 and retired in mid-2010 after thirty-eight years of service. He was president of Solar Turbines in San Diego from 1990-93 and corporate CFO from 1993-95. In 1995 he became a group president and member of Caterpillar’s executive office. While chairman, Owens served on the executive committee of the Business Roundtable, was chairman of the Business Council and an advisor to Presidents Bush and Obama. He served on President Obama’s Economic Recovery Advisory Board from 2009 to 2010.

Owens is currently a director of Alcoa Inc. He recently retired from the boards of IBM Corporation and Morgan Stanley. Owens was chairman of the executive committee for the Peterson Institute for International Economics, and served on the Board of Directors of the Council on Foreign Relations. He is a former chairman of the board of trustees for North Carolina State University in Raleigh, North Carolina. Owens is a native of Elizabeth City, North Carolina, and graduated from NC State University in 1973 with a PhD in economics.

Fourth generation beekeeper Leigh-Kathryn Bonner is a dynamic leader who started her entrepreneurial journey at just 22 years old. Raised in Raleigh, North Carolina, she spent her younger years on her family farm where she fell in love with agriculture. As the Founder and CEO of the rapidly expanding company Bee Downtown, she has made a name for herself in a historically male dominated industry.

Bee Downtown, began as a school project during her junior year at North Carolina State University. The buzzing company now provides unique, year-round employee engagement and leadership development for many of the largest corporations in the world. The programming is facilitated at beehives which are placed and maintained by the Bee Downtown staff on corporate campuses.

Leigh Kathryn inspires, motivates, and moves audiences through her unique and captivating storytelling ability. She is a strong advocate for women and strives to use her platform to empower and transform leadership and environmental stewardship in an ever changing global economy. She is part of the TED speaking community, a 2018 INC Magazine-30 Under 30 Rising Star, and most recently named to the exclusive Forbes 30 Under 30 list.